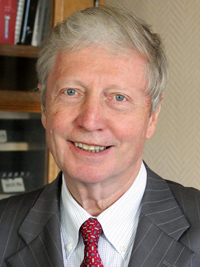 Dr. Hoffmann, who was awarded the Nobel Prize for “discoveries concerning the activation of innate immunity,” is an especially fitting speaker for an entomology conference. He and his colleagues used insects, namely the fruit fly Drosophila, to decipher the potent antimicrobial defenses. Over many years, these studies have led to a general understanding of recognition of infection by flies, the connections between recognition and signaling, and the subsequent control of expression of immune responsive genes, namely of those encoding antimicrobial peptides which oppose the invading microorganisms.

Hoffmann’s interest in insects began at an early age and was inspired by his father, a high-school biology teacher in Luxembourg who worked on the systematics of various insect groups during his spare time.

“Most of my father’s studies focused on Odonata, Ephemeroptera, Orthoptera, Dermaptera, and Hemiptera, and he was particularly interested in the development and behavior of mayflies,” Dr. Hoffmann said. “Under his guidance, and with his strong involvement, I published my first paper on the aquatic Heteroptera of Luxembourg.”

After high school in Luxembourg, Hoffmann attended the University of Strasbourg and worked on his Ph.D. with Professor Pierre Joly, a neuroendocrinologist, on the antimicrobial defenses of migratory locusts.

Dr. Hoffmann, who uses insects as model organisms to study the immune system, will talk about “Innate Immunity: from Insects to Humans” and illustrate how basic research on insects can lead to broader discoveries relevant to human health.

“We are absolutely delighted that Dr. Jules Hoffmann has accepted our invitation to give a lecture in Orlando,” said Dr. Alvin Simmons and Dr. Walter Leal, co-chairs of ICE 2016. “The appearance of Dr. Hoffmann and Dr. Peter Agre — two Nobel Prize winners — is unprecedented in the 104-year history of the International Congress of Entomology.”