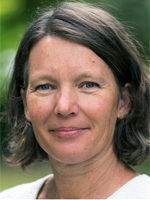 Associate Professor Jacqueline Beggs is one of New Zealand’s leading entomologists, based at the School of Biological Sciences, University of Auckland. She is currently academic leader of the Ecology, Evolution and Behaviour group, and director of the Centre for Biodiversity and Biosecurity. She is of Ngāti Awa (Māori) descent.

Her main research focus is on the ecology of invasive invertebrates, complemented by research on the biodiversity and conservation of native species. Jacqueline has demonstrated the major impact of introduced Vespula wasps in New Zealand, and her research on biological control and population modelling of these wasps has provided a sound basis for ongoing development of control tools.

Jacqueline advises government agencies (Minister of Primary Industries as well as the Environmental Protection Authority) on insect biosecurity issues, drawing on her knowledge and experience of conservation management, invasive species, ecology, and indigenous people. Jacqueline has received more than NZ$9 million in research funding and was a recipient of a Fulbright Award in 2007. She has published more than 75 peer-reviewed research papers while juggling the demands of raising two boys.